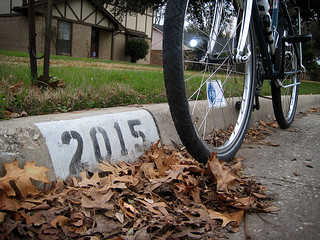 First things first - Happy New Year!! Here's hoping it will be a good one for us all.

The title of this post is from a song by Soft Cell from 1981. That was the year I left school and it was one of my favourite songs of that time. It made me think of seeing in the new year and saying farewell to the old.

I've been looking back at my posts through 2014 and I think one of the biggest turning points concerning my jewellery making was the decision to put a garden shed in what was already a pretty small backyard and turn it into my workshed or "shed of wonders" as my friend Nicki describes it. 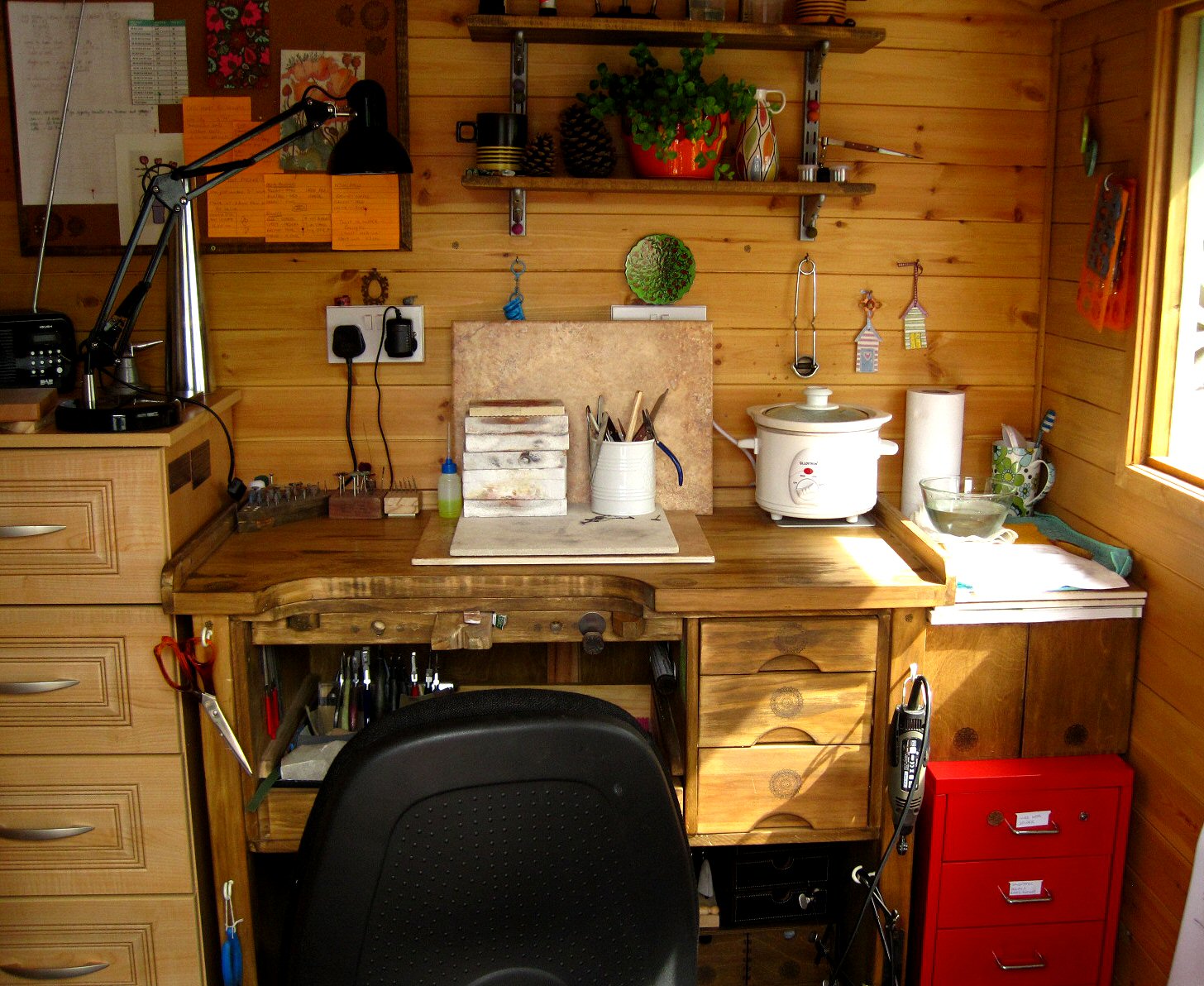 This photo was taken shortly after I moved in to the shed in April 2014 when there was sunshine and it was warm enough to leave the door open.....At the moment I'm using an electric radiator in the shed which is ok and does take the chill off but it can get pretty cold in there at times, although a spot of soldering soon warms the place up and I have been known to turn off the radiator and open the door at times even when it's cold outside ☺

It's changed slightly inside now as new tools and other stuff have appeared - a flexshaft to replace the Dremel, a new disc cutter, things have been attached to the walls so I can hang other things from them, another of those red Ikea storage drawer units.... I also replaced the small very rickety table I used to make my findings on with a proper desk which is so much better. The plant in the photo {on the shelf} couldn't cope with the cold and kept dropping it's leaves like confetti when I was soldering so it's been replaced with a cyclamen which does likes the cold. I've just about used up all the space in there on the floor and walls so I don't think I'll be adding anything else very soon. Although......

And so what will 2015 bring jewellery -wise?
My word of the moment is bronze. It's not a metal I've taken much notice of when it came to making jewellery or findings but after whipping up a few bangles using 2mm round bronze wire yesterday I was delighted with the result. The natural shiny colour of the bronze is beautiful, similar to rose gold in my opinion and nothing like that ugly yellow tone you get with brass. Apologies to any brass lovers but I just don't like it for jewellery. 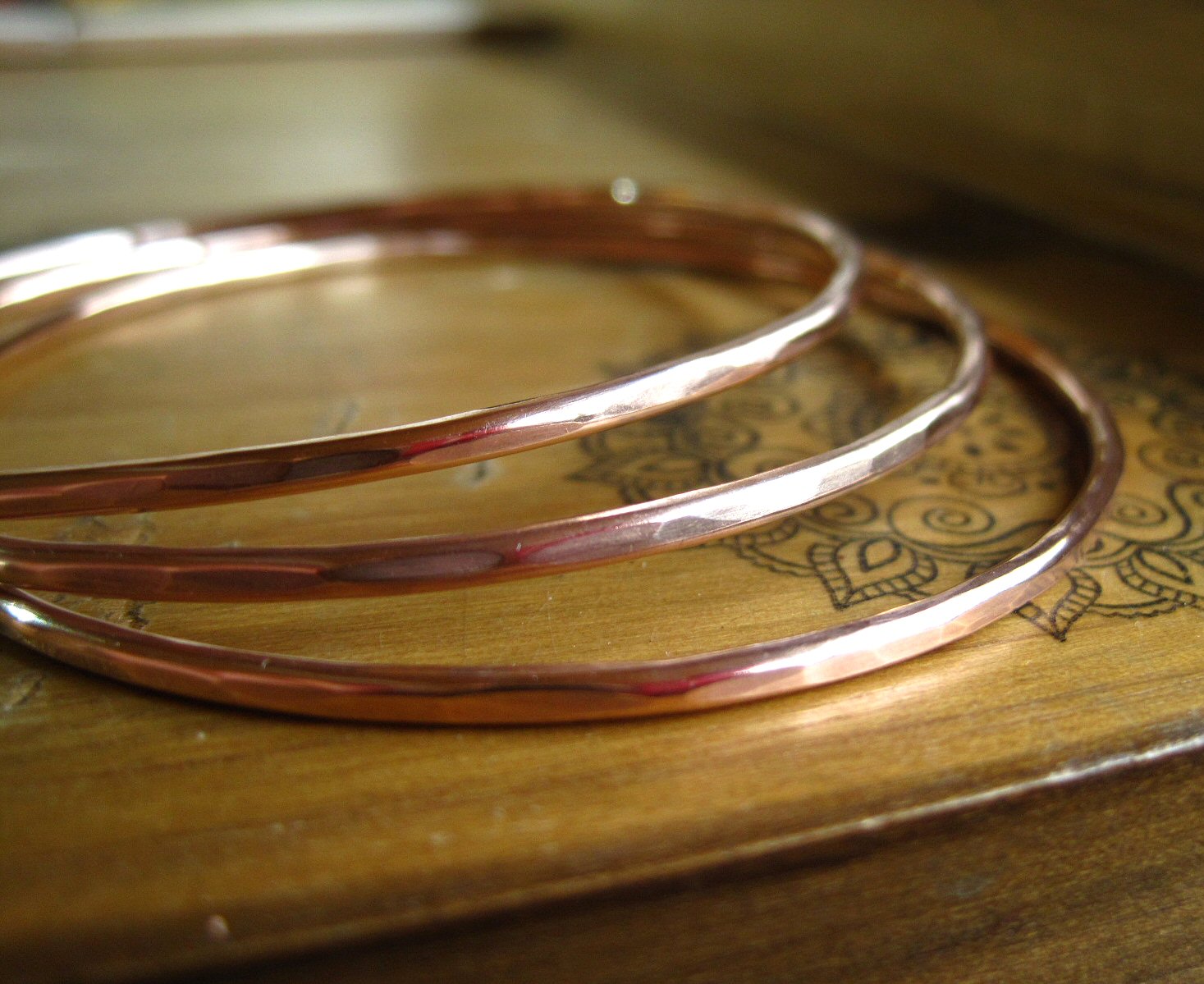 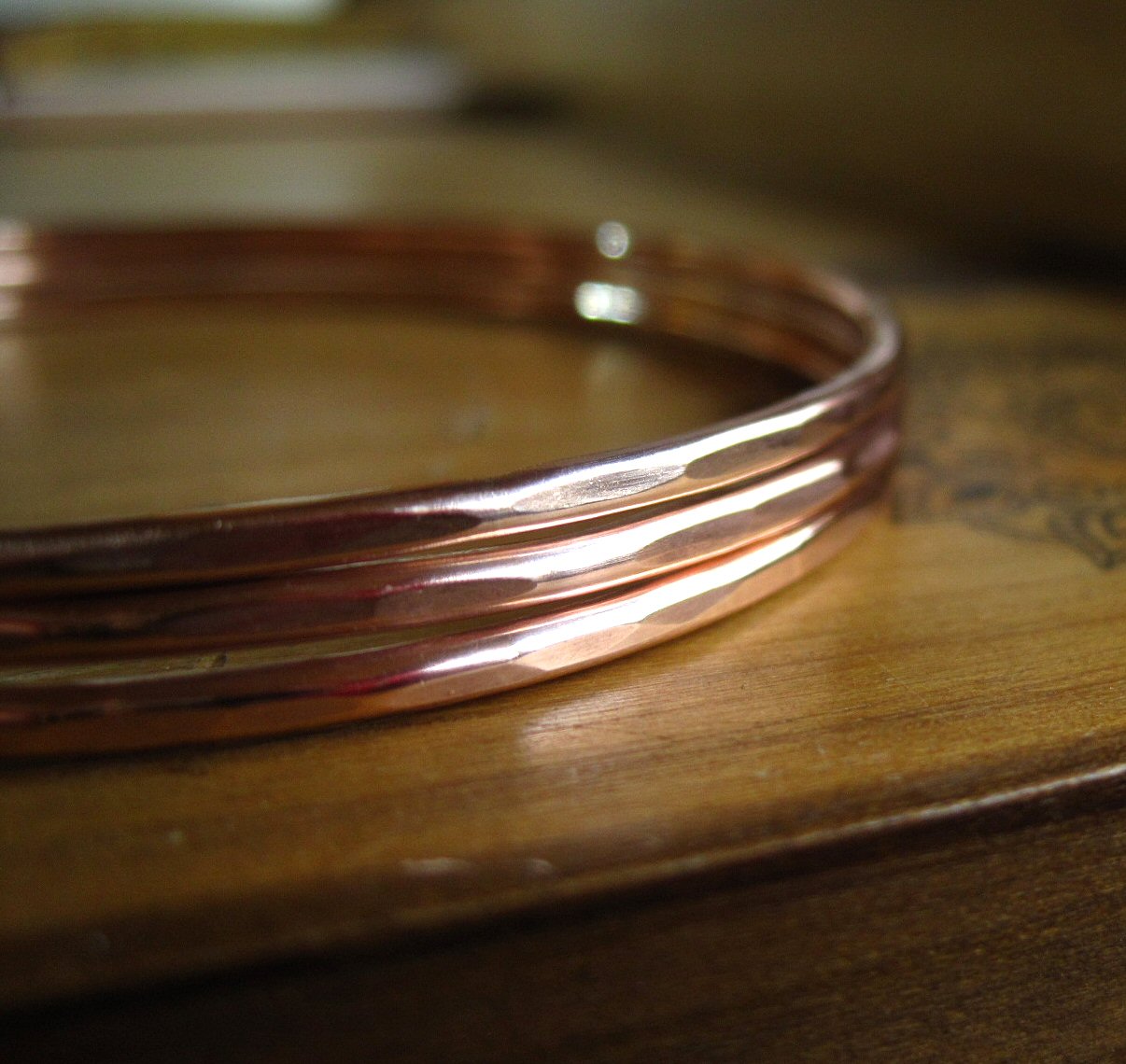 {Bronze bangles in their natural shiny state - the pink colour reflected in the metal is from my bright pink camera! Must buy a silver coloured one next time.....}

I'm very much a lover of oxidized copper and silver but I do really like the colour of the bronze in it's normal shiny state. I made these bangles to find out how the bronze behaves when soldering and being shaped and hammered. I'm glad to say it's very much like copper but needs a bit less heat for soldering. I haven't attempted to oxidize it yet but I do know it takes LOS just like copper which is good to know.
After a bit of research on Etsy I've found that there's not that many people selling handmade bronze findings which got me thinking.....and ordering some 20g bronze wire!

I'm planning on adding bronze bangles and findings to my Etsy shop in the next few weeks. I'm currently having a break from my shop and website so I can catch up with things and get some new stock made. This time of year always makes me want to get organized and act on ideas I've had but never had the time to get round to actually doing. So despite the cold weather and chilly shed working conditions I'm really looking forward to what 2015 will bring ♥

Friday, September 27, 2013
So my love/hate relationship with etching sterling silver continues. I've tried a few times now and always end up with different results most of them not that great to be honest. I've tried connecting the silver and a piece of copper to a 9v battery and also heating the ferric nitrate. Sometimes the results are good sometimes not so good. I currently have an etched piece of silver sheet waiting to be reticulated and rid it of the mess that is the etched "pattern".
I now know that using stamps and Stayz On ink just doesn't work with silver - the time needed to etch using ferric nitrate is much longer than etching copper and the ink starts to wear away after about an hour. This results in the pattern being patchy as the resist is eaten away and the silver ends up quite lumpy and course looking. I have yet to try using pnp paper. I don't know why but it all seems a bit of a faff to do. I don't have a laser printer so would need to find somewhere or someone…
34 comments
Read more

Tuesday, July 03, 2012
I must admit up until a few weeks ago I was vaguely familiar with the name Sizzix but as to what you actually did with a "Sizzix" I was completely in the dark! That was until I stumbled across a video from Vintaj showing how you could use their embossing folders with a Bigshot to create designs on metal ("metal" - my favourite word after chocolate!)
I was really impressed and itching to have a go, I just needed a Bigshot........ I waited a few weeks then when the urge to possess one overcame me I went out debit card at the ready..............and the shop had sold out! So I trundled off to The Range on the off chance and came home clutching my own surprisingly heavy pink and black wonder machine. It sat on the dining room table for a couple of days while I waited for the embossing folders I'd ordered online to arrive then the time came to start playing!

Thursday, January 23, 2014
I had another play with my rolling mill last week using some of the texture sheets from Etsy shop Rolling Mill Resource. I used some sterling silver and copper sheet and soon discovered it's best to get organized before you start!

I cut the sheet to size and worked out which design was going on which piece of metal. I also tried a feather but more on that later. Most of the sheet I used was 20g/0.8mm with one piece of 18g/1.0mm and one of 22g/0.6mm.
I've read that you should do a dead pass of the metal through the rolling mill with the gap the same size as the metal and texturing item. I'm not sure what this is supposed to achieve but I don't bother doing it. Judging the correct size of gap between the rollers is a trial and error thing that you discover by setting the gap then starting to roll the metal through. If there's too much resistance you make the gap bigger until there's just enough resistance to roll the metal through without giving yourself a herni…
15 comments
Read more