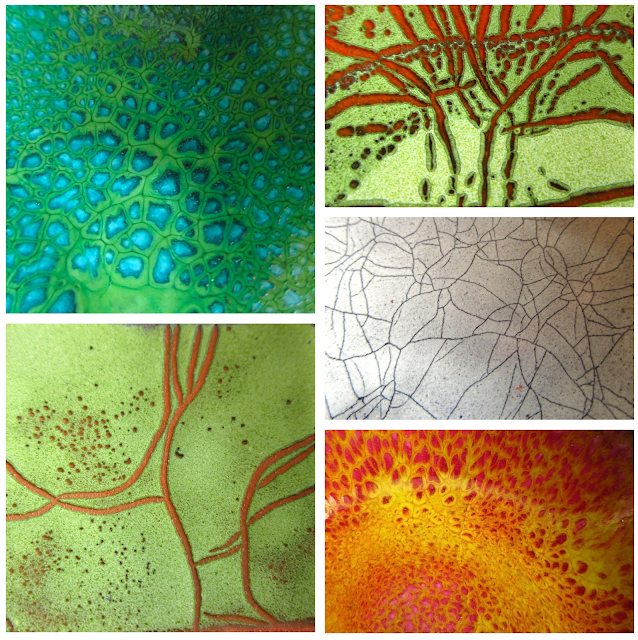 Buying a kiln recently has given me the chance to experiment with enamelling on larger pieces of copper and to produce some really cool effects. These effects happen when you combine different types of enamel.

I usually use smaller flat pieces of copper for making enamelled earrings and have had some of these effects happen when firing with a torch but they are much more obvious when you use larger pieces. I made a few practice pieces which you can see in the photos below. 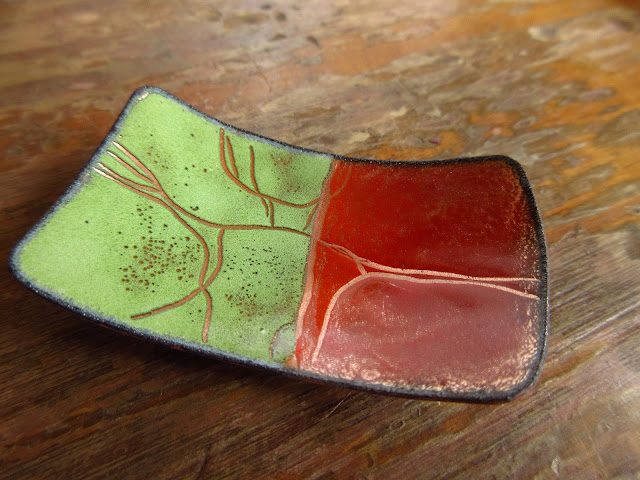 This was flux {a transparent enamel not to be confused with soldering flux!} applied straight onto copper and fired until the copper was a bright golden colour. Then I added a layer of liquid enamel in green and red over the flux and fired again.
The lines and spots form when the enamel becomes hot enough to start moving and in this case the transparent pushes through the liquid enamel layer forming these cool lines and spots. The effect is better in the green liquid enamel than the red. 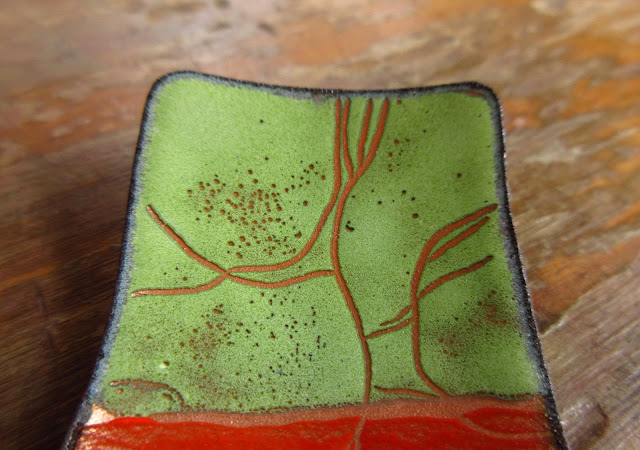 Next is an effect that reminds me of raku fired ceramics. 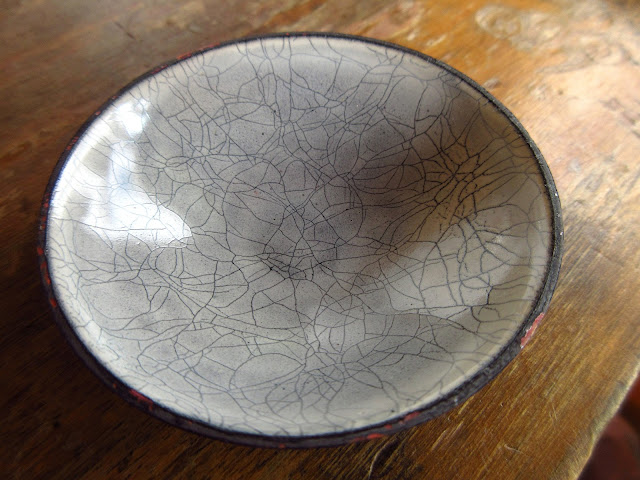 This time I applied a layer of black opaque enamel and fired until it was almost smooth. Then a layer of white liquid enamel was applied on top and fully fired to produce this fab effect. 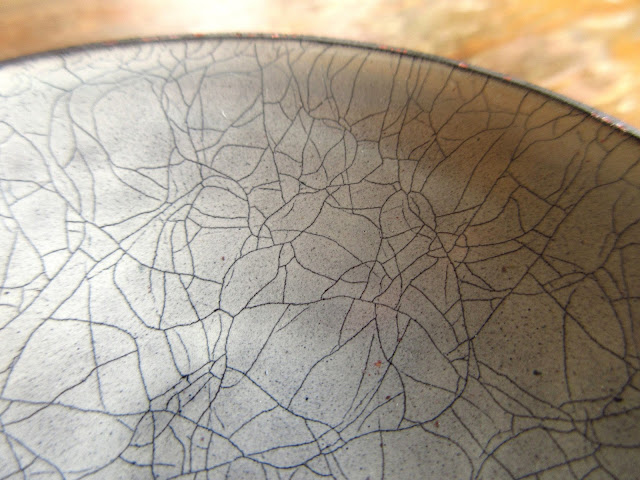 I think the lines are formed through movement in the liquid enamel layer allowing the black base to show through. They aren't cracks in the white enamel as when it's fully fired the enamel surface is completely smooth.

It's difficult to achieve an even layer of the liquid enamel on a sloped surface like this bowl so it is a bit darker in places. Allowing the first liquid layer to dry then applying another layer is also quite hard to do evenly! I've found it's better to fire just once for the best effect. You can fire it twice using two layers of the liquid enamel but you do get the crack effect happening in both layers which overlaps and doesn't look as good. I think some experimenting is called for to get it right :D

The next effect uses a base of opaque enamel then a layer of clear flux. The top layer is a liquid enamel. 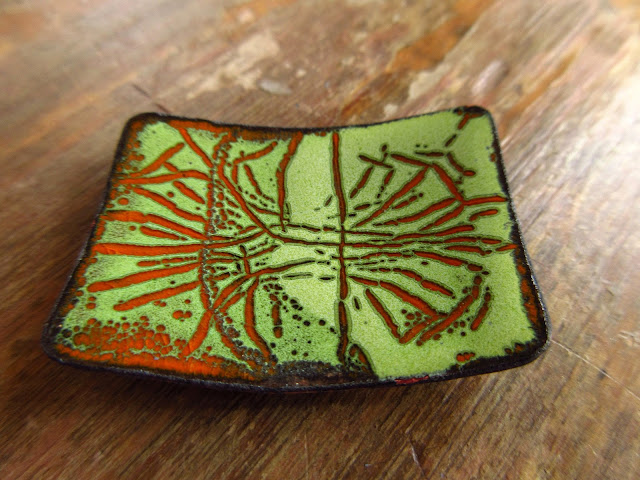 This is the same as the first example but with added colour by using a base of opaque orange underneath the clear flux. The green liquid layer has two layers on the right side and the liquid layer was fired just once. 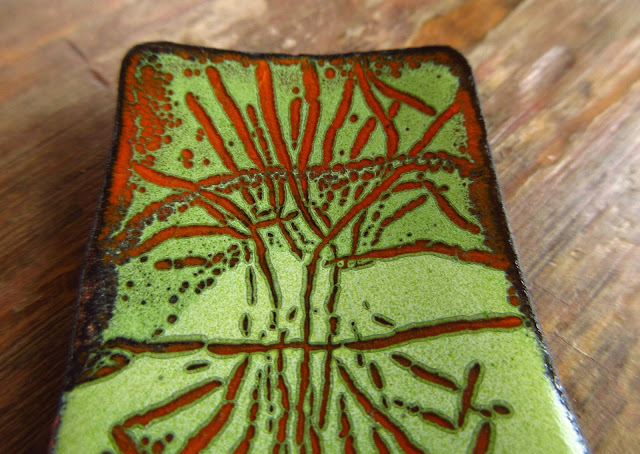 There is a bit more going on where there is just the one layer of liquid enamel but the other side still looks interesting. I think the shape of the piece you use will affect the patterns formed too.

The next effect is my favourite, probably because it's so colourful. 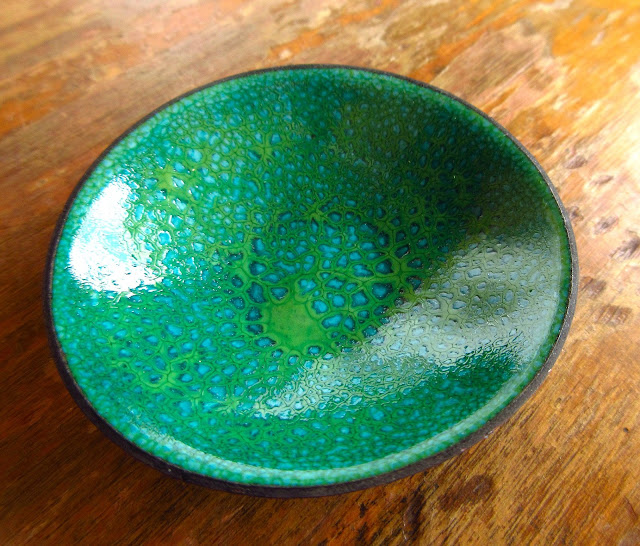 This effect was produced by layering a transparent enamel between two opaques. Gravity and the sloping sides of the bowl also help to create the effect. When it's fired to 800°C the transparent enamel layer starts to push through the top opaque layer creating cell shapes. This allows the base opaque colour to show through too.
In this case I used an opaque seafoam base, a turquoise transparent and an opaque pea green top layer.

This bowl is made the same way with slightly different shades of blue and green opaque colours and I added some holes for decoration. 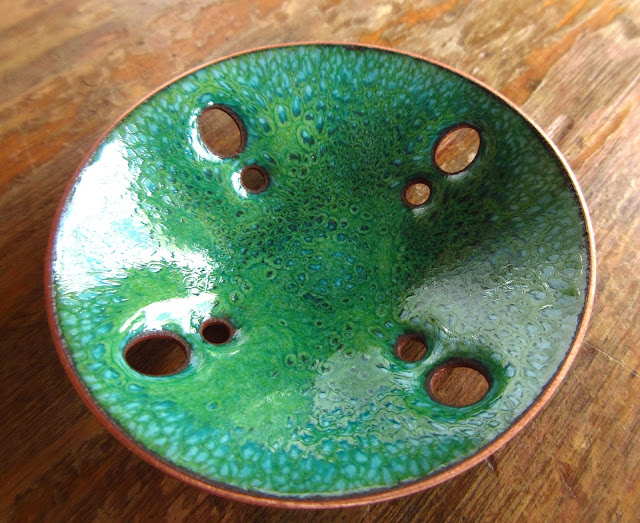 I love the way the top hole has stretched into an oval shape as I formed the bowl. 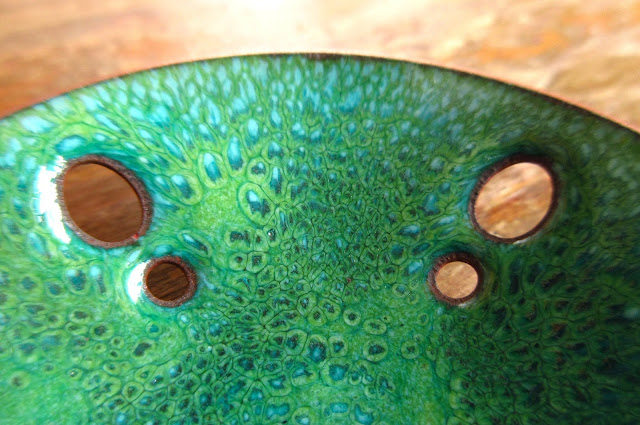 I already have a list of colour combinations to try when I make some more of these :D

I still have a lot more to learn with kiln firing enamels but these practice pieces are really helping me to discover the wonderful effects you can achieve with enamel.